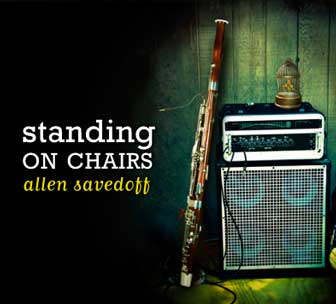 Third in a series of eclectic projects featuring the bassoon and contrabassoon, Allen Savedoff, Kim Scharnberg and Brad Aaron have teamed up again for Standing On Chairs. This time they have created an instrumental pop, rock and blues album, peppered with atmospheric introductions. Featured on the album are the voices of NPR’s Anne Garrels, actor Geoffrey Holder, Blues artist Kal David as well as many well-known Los Angeles musicians.

Allen Savedoff,  “Standing on Chairs” (Big Round Records). Allen Savedoff’s convictions are deep in more ways than one. As he writes, it’s not often you hear the bassoon, let alone the contrabassoon, in jazz and blues. This funky disc sounds like something you would come up with in the middle of the night. Savedoff—a Rochester native now a bassoonist with the Hollywood Bowl Orchestra—gives us 12 tunes, from “Strange Fruit” to Charles Mingus to Irving Berlin. The bassoon gives deep burps easing into a Dr. John number. In the folkie standard “Buttermilk Hill,” it revs like a car engine. Savedoff explores all the rude sounds of which his instrument is capable, joined by such exotic entities as “canine vocalizations,” “tap dancing bass sax,” “checkout voice” and an outboard motor. You gotta include a Tom Waits song, Waits having a voice like a bassoon. So God love Savedoff for throwing in “Take It With Me.” I sort of missed a singer, because the words are so pretty, but Savedoff’s gruff instrument, set against a wistful piano and bass, is the next best thing to Waits’ guttural croon. ★★★ 1/2 (Mary Kunz Goldman)

ALLEN SAVEDOFF: STANDING ON CHAIRS. Classical crossover albums can sometimes be compared to a watered-down martini, but Rochester native and current Los Angeles freelance musician Savedoff does wonders with a bassoon. He plays blues, pop and rock with no apologies on the black sheep of double reed instruments. The contrabass bassoon opens Dr. John's "Right Place, Wrong Time" as a bountiful funk bass. From there, it's a collection of greats from Mingus to Irving Berlin standards, and even a Tom Waits selection. The bassoon may be relegated to an orchestra most of the time, but Savedoff's explorations seem to stem from his experiences as a soundtrack musician. He's recorded in The Curious Case of Benjamin Button, Spiderman 3 and Wolverine, among others. —Anna Reguero