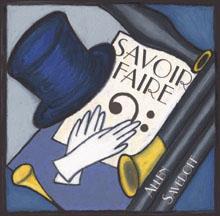 This is West Coast bassoonist Allen Savedoff’s second CD, and, like his first, which was entitled Contradiction, this one is also a lot of fun! Here, however, Allen divides his time between contrabassoon and regular bassoon, performing nicely on both instruments; whereas Contradiction featured only the contra. Just a bit of his “biographical notes” are quoted here to give one the idea of the fun “flavor” of this recording:

“Like a Horatio Alger story, Savedoff transcended the immense handicap of having an astronomer for a father and a classical scholar for a mother. From such unpromising beginnings he eschewed all the blandishments of the material world save the contrabassoon and sometimes the bassoon. More amazing facts about his life may be gleaned from posters at many U.S. Post Offices or from his first album, Contradiction, for which he received 9 minutes of fame on NPR’s All Things Considered (somebody still owes him 6 minutes).”

To achieve his second album, Allen has recruited some of the best talent from the Los Angeles and Hollywood music making scene, including such composers as Emmy award winners Bruce Broughton and Jeff Beal, multi-Oscar winner John Williams and composer/producer Kim Scharnberg, as well as relative ‘newcomers’ Damian Montano and Gernot Wolfgang. (Gernot, himself, has achieved quite a circle of admirers already in the IDRS for his numerous excellent compositions for bassoon composed for his wife, bassoonist Judith Farmer.) The many performers on the CD are among the area’s finest as well, including oboists Earle Dumler, Jon Clarke, and Kathleen McNerney, oboist/English hornist Catherine Del Russo, bassoonist David Riddles and bassoon/contrabassoonist Carolyn Beck.

The recording opens with an excellent, exuberant new work by Bruce Broughton entitled Bounce for bassoon, double string quartet and bass. It is a jazzy, riffy piece with the bassoon dancing over a particularly “bouncy” accompaniment in the strings. The 8+ minute single movement composition is a nifty new addition to the bassoon repertoire and, published by Brubel Music, it will hopefully reach a larger audience. Equally exciting and jazzy is Gernot Wolfgang’s Uncle Bebop movement from 3 Short Stories for bassoon and viola (published by Doblinger).
(Incidentally, at my request, Gernot has written an excellent article/essay on composing for the bassoon, which appears elsewhere in this issue, ed.)

Damian Montano’s Canzona and Scherzo for bassoon and 13 instruments is another work new to this listener and is recorded here for the first time. At just under 13 minutes in length it is a solid, serious undertaking for the bassoon. The musical style, as the excellent program notes point out, is reminiscent of early Mahler and Stravinsky. Indeed, following the dark and somber Canzona, the Scherzo has a demonic tarantella-like quality one often finds in both composers at times. The middle section becomes even more “Mahler-and-Stravinskyesque” with a sarcastic Viennese waltz a la Petrouska thrown into the mix. In all it is another interesting composition that should also reach a larger audience.

Yet another interesting work is Jeff Beal’s (low man) Totem Pole published by Post Merdian Music. It is scored for wind quintet, but with English horn substituting for the oboe, which gives the ensemble a lower, somewhat darker sound. At just over 6 minutes in length, there is a lot of low bassoon music in the composition, as the bassoon often initiates each section thematically, from which much of the music then evolves. The style is expanded non-pointallistic tonality and would be very appealing as a contrasting single movement piece on a wind quintet concert. Again, hopefully, it will reach a larger audience.

The beautiful Sous le dôme épais or Flower Duet from his opera Lakme by Leo Delibes provides a nice contrast to the works above. In this arrangement it features Allen playing BOTH parts of the duet on the bassoon-interesting, if different sonority.

There is a definitely “Impressionistic” feel to the CD, with works by Ravel and Debussy on the program. Interestingly enough, however, the Ravel (Pièce en forme de habanera) and the most especially the Debussy (Syrinx) are played on the contra! The Ravel is scored for contra and guitar, but the Syrinx is contra all alone, dancing like a fuzzy bear to Debussy’s delicate lines-nice touch. The contra also appears in a brief (2’ 40”) piece by John Williams from the musical score for Harry Potter and the Sorcerer’s Stone-a duet for harp and contrabassoon entitled Fluffy and His Harp. A brand new work for the contra is also featured, a nifty jazz composition for contra and a wide variety of colorful percussion entitled Concussion by Kim Scharnberg (ASCAP).

But Allen really brings the contrabassoon “front and centerstage” in the final, longest work on the program, which is a “modernized” version of Prokofiev’s Peter and the Wolf, with the contra bassoon playing ALL the characters-bird, duck, cat, grandfather, hunters, with the renowned voice of Louis Giambalvo, who has been heard as the “bad guy” in numerous film and tv shows for the past 25 years, giving you HIS side of the story as the wolf. It is all great fun and brings this colorful CD to a delightful conclusion. (Th…th…th…that’s all folks!)

Kudos to Allen Savedoff for a super CD that is fun to hear throughout, with both serious new music for inclusion into the bassoon’s repertoire, juxtaposed with some fun stuff for the contra that is bound to bring a smile to the most “hardened” serious bassoonist. Everything has been nicely played and nicely recorded and dubbed, so it is easy to give this now offering a high rating and recommend it strongly to everyone.