In 1999 Arlen Fast gave a talk in Los Angeles presenting his ideas on how to improve the upper registers of the contrabassoon. Based on Fast's work and our knowledge of acoustics, it was predicted that the desired improvements could be accomplished by adding octave vents in new locations and by careful sizing of all the vents. Since these new vents were expected to be located on the long metal pipe, the pipe between the bocal and the tuning slide, a long pipe was needed for experimentation.

Patterson Hornworks, a french horn manufacturing company, made a long pipe for this experimentation. The dimensions for the bore of this pipe were derived from measurements taken from a number of contrabassoons. This hand-drawn, seamed pipe was made of yellow brass. It improved the resonance, sound focus and pitch definition in all registers of the instrument. Long pipes were then made out of red brass and nickel. Of the three metals, the yellow brass pipe produced the preferred sound. Next, a short pipe, the pipe between the tuning slide and the wood, was made and installed; it yielded further improvement to the sound, especially the pitch definition of the lowest notes. These pipes, with the original key system, were used to record the jazz-style contrabassoon album, Contradiction (Capstone Records).

With these pipes, experimentation could be done to determine what would improve the upper registers of the contrabassoon. Theoretically, each note in the upper register should have its own vent location and size. This system would be ideal acoustically but impractical mechanically and technically. Therefore a system must be devised using fewer vents, with each vent representing a compromise location and size capable of producing multiple notes. The vent size to be used must be as large as possible for increased resonance yet small enough to produce the desired number of notes.

This new key system uses four independent, closed octave vents. These are: 1) a new front vent on the short pipe, which is opened by a key placed below the left hand first finger key and is operated with the same motion used for the half hole on bassoon; 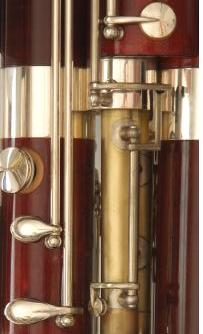 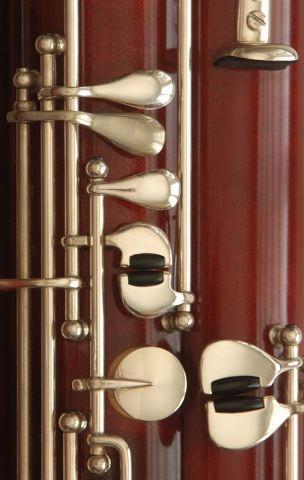 In the next octave, the F# and G fingerings use the front vent. The top vent may be left open if desired without any adverse effect, but having the thumb free is of great technical benefit. The G# and A are produced with both the front and lower vent. As in the traditional system, the Bb, B and C fingerings use the lower vent. The C# is essentially the open F with resonance keys and is produced with both the lower and middle vent.  For D and D# both the front and middle vents are opened.

This system allows performers complete flexibility in choosing their preferred fingerings, including which vent(s) to use. Different reed styles and strengths may require different fingerings from those suggested in the chart.

These new pipes and keywork have been added with positive results to Mollenhauer contrabassoons as old as 1986 and as new as 2002. The alterations required to implement this new system are made on the metal pipes except for two holes drilled in the wood of the wing joint to set the posts of the front vent key.

Addendum:  Subsequent to the presentation of this information at the IDRS Convention in Greensboro, NC (June 2003), experimentation has been done on the Fox contrabassoon. The long pipe can be added to the instrument, improving the sound greatly as it does on the Mollenhauer. The middle vent is also equally effective in improving the C#, D and D#. The lower and upper vents can be re-sized for improved results.

However, the front vent cannot be placed in the same position on the Fox as on the Mollenhauer due to the difference in design of the tuning slide. To remedy this situation the following choices are possible: 1) to modify the tuning slide to replicate the Mollenhauer design (also adding the short pipe); 2) to find an alternate location for the front vent or 3) retain the existing system. Further experimentation is being done to decide which of these alternatives is the most effective.

Acknowledgements: This project was done in partnership with Tom Yaeh, a woodwind technician at RDG, Inc., whose expertise, work and patience was invaluable. Many thanks to Jim Patterson for the design and creation of the pipes and to Arlen Fast and John Peterson for sharing their acoustical knowledge.

Allen Savedoff is a freelance bassoonist and contrabassoonist in Los Angeles. He is a member of the Pacific Symphony and Hollywood Bowl Orchestras. 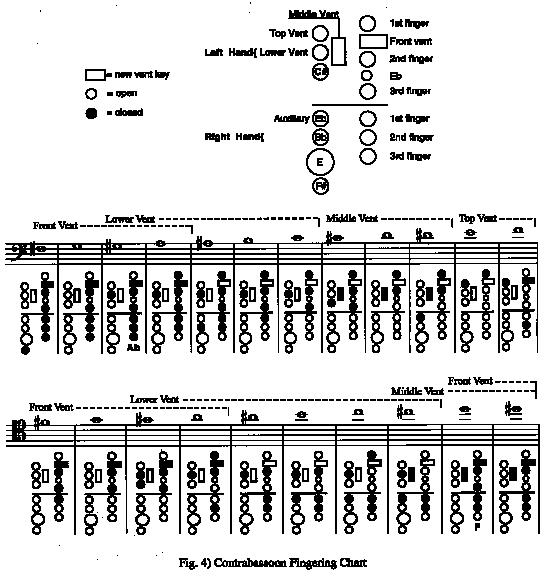